The Story of R. Frank Jones, MD: a Medical and Civil Rights Pioneer

The Story of R. Frank Jones, MD: a Medical and Civil Rights Pioneer 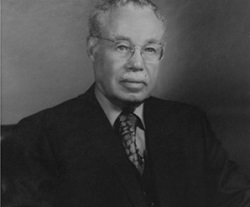 During African-American History Month, the CareBlog honors the impact that Dr. Richard Francis Jones' life had on others.

"We have no hope of solving our problems without harnessing the diversity, the energy and the creativity of all our people" - Roger Wilkins, JD

Dr. Richard Francis Jones (R. Frank Jones) became interested in surgery when he was on the operating table in 1916. He spent 3 weeks in a surgical ward as a patient. After recovering from an inguinal hernia, he decided surgery and medicine was his calling. This would prove historic for medicine and civil rights.

Many former patients want to study medicine after experiencing a personal illness, or one in their family, says Dr. Damon Davis. He is a board-certified urologist who co-authored a study on Dr. Jones for the American Urological Association (AUA) in 2013.

In the early to mid-20th century, Dr. Jones' journey from patient to physician was full of jagged racial barriers.

"He had the audacity to pursue surgery as a profession," said Dr. Davis.

Dr. Jones spent his professional life as a doctor in his native Washington, DC . In 1923, he was appointed as assistant in gynecology and urology at Freedmen's Hospital (now called Howard University Hospital).

In 1936, Dr. Jones became the first African-American Diplomate of the American Board of Urology. He is the sixth African-American ever to become a board certified specialist in the U.S. At the time, black physicians were not allowed to join medical specialty societies, which kept them from working in most hospitals.

"Segregation and racism were a huge impediment," Dr. Davis said. "He could only work at African-American hospitals. He was reliant on white urologists who were willing to train him."

By 1947, Dr. Jones helped achieve an important milestone in medicine by helping start the urologic training program at Freedmen's Hospital. He was their first director. While Dr. Jones had to rely on forward thinking white trainers to help him, a new group of aspiring black urologists could now lean on the support and resources of Freedmen's program.

In a 1972 profile of Dr. Jones in the Journal of the National Medical Association, he called his role in this training program his "greatest professional contribution." He retired as medical director of Freedmen's in 1970.

"He was about building bridges so other African-American urologists could have the same opportunities that he did," Dr. Davis said. "His mental fortitude, perseverance and drive can't be underestimated in opening the door for all African Americans-- not only in urology, but in other historically small sub-specialties of surgery."

Learn more on our special episode of the Urology Care Podcast: