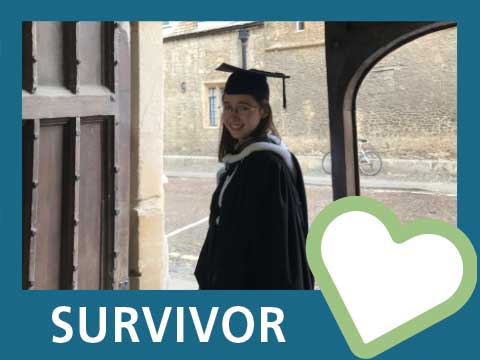 Annika was 16 and working late on a school assignment. When she got up the next day to hand it in, she felt pain in her bladder and the sudden urge to urinate over and over. She went to the doctor to get tested to see if she had a urinary tract infection (UTI). It came back negative.

A native of Australia, she worked hard in school to go to her dream university in England – Oxford. She was accepted that same year, travelled to a different country and started classes. She was still in constant bladder pain. The burning and urgency seemed to take over her life. To get relief, she was soaking huge incontinence pads as she walked across campus every day.

Each week at school she would go to the doctor to get re-tested for a UTI. Sometimes the tests would come back positive, sometimes negative; sometimes it would say ‘mixed growth: contaminants’, but for months in a row. If it was positive, she would get three to five days of an antibiotic, and she would start to feel better. As soon as the prescription ran out, the pain and urgency came back.

She had to take her exams in a room with a bathroom because she was constantly having the urge to urinate. She was chronically tired from just a few hours of sleep every night because she to go to the bathroom every hour.

By the time she finished school and got home to Australia she was exhausted. She tried different treatment options for the next four years. She went in for a procedure where a urologist looks inside the bladder and they didn’t find any disease. To relieve the pelvic pain, she had a hysterectomy and that didn’t work either.

Just after her 23rd birthday, she was given the option of a urostomy. A urostomy is an opening in the belly (abdominal wall) that's made during surgery. It redirects urine away from the bladder.  Urostomy patients must wear a pouch on the outside of their body.  She was so desperate to stop the pain, she considered this option.

But, something unexpected gave her hope. She received three weeks of a high-dose antibiotic for an issue with her leg and soon her bladder felt better! She’s been on antibiotics for 9 months and it is helping. She is incredibly relieved that she found a treatment option outside of surgery and is hopeful all women with these symptoms, across the world, can receive the same care.