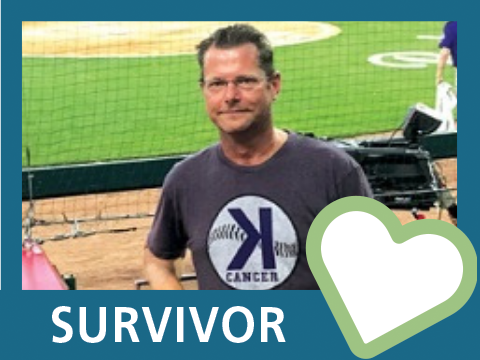 In 2005, Mike was 33 years old and living in South Florida when he felt a lump on his left testicle. He knew right away that something wasn't right. He said to himself, "this is cancer and I'm going to die soon."

Rather than going to the doctor, Mike decided to live large. He threw himself a "good bye" party to see everyone he cared about. He jumped at every chance to take advantage of life - like skiing, partying and traveling.

But the outside persona he adopted didn't tell the full story. Inside, Mike was "living a mental nightmare." He was scared, sad and acting erratically.

Finally, after seven months, Mike went to his primary care doctor, who sent him to a urologist to confirm he had testicular cancer. He was told he was very lucky, because his cancer was still a stage I seminoma. It hadn't yet spread to his lymph nodes.

Mike's urologist offered him three choices for treatment: radiation therapy, chemotherapy or the lesser-known option (at the time) of active surveillance. He was asked what he wanted to do. Because Mike is a pharmacist, he was invested in doing his own research to figure out what was best. Luckily, Mike chose active surveillance. This saved him from dealing with side effects.

Eventually, he knew he needed to get testicular cancer surgery. That 45-minute procedure to remove his testicle from his groin was all he needed to be cancer-free. Mike's fears went away. For the next five years he chose active surveillance with CT scans, chest x-rays and tumor marker blood tests.

Now, 13 years later, Mike says if he could turn-back time he would have skipped the mental distress he felt in the beginning before he went to the doctor. Mike wishes he could give a little advice to all men, such as:

Now Mike is the founder of the Testicular Cancer Society, a non-profit organization loyal to increasing awareness and education about testicular cancer to support fighters, survivors and caregivers.

While about 60 percent of the calls to his group are from the women in men's lives, he hopes to see more men taking an active role to reach their goal of being cancer-free.