Urology Health - In Sickness and in Health

In Sickness and in Health

In Sickness and in Health 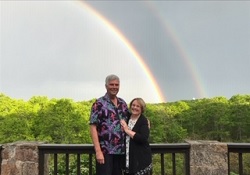 This blog post has been submitted by Claremary Sweeney. She is the author of the South County Mystery Series and lives with her husband Charley to whom nearly all her books are dedicated.

September is Prostate Cancer Awareness Month. This is a reflection of her and her husband Charley's experience with prostate cancer.

Charley and I stood holding hands in front of friends and family.

"I take you to be my lawfully wedded husband, to have and to hold, from this day forward..."

We sat holding hands in the urologist's office.  "Mr. Sweeney, you have cancer."

That moment, our lives began to veer off into a completely different course than we'd planned.

An operation, thirty-six radiation treatments, and then, in 2009, a prognosis.

My first reaction was intense anger - to think this was happening to such a good man. I remained angry for the next twelve years. It fueled my determination. He was going to survive this. My dad had died of prostate cancer at a time when there were few options.

The word "Cancer" was never spoken. We kept him at home through it all. My mother and my sister, who was in nursing school, knew how to care for him. All I could do was sit by his bed, hold his hand, and talk. I wasn't much help. He died in June, 1978, just before Father's Day. I still have the card I'd bought for him and left on the night table. He never opened it.

I was determined this time would be different. I told Charley that day when we left the doctor's office, "I waited 50 years to find you and I have no intention of letting you go."

His daughter was expecting his first grandchild. He would see this baby take his first steps. Hear his first words. Go to his baseball games. Take him on adventures. Be at his graduations...

Charley sat by my side trying to grasp the words he'd just heard. Five years?

I put my hand on his arm.

"Dr. Rodriguez, we don't accept that. I've been doing research about new treatments and medicines being developed. Charley is relatively young and healthy. He had no symptoms. He was once a world-class, long distance runner. He's disciplined, determined and persistent. We'll do whatever it takes. Go wherever we have to. I promise, if you put him in a clinical study with the best medicines, no placebos, he'll be the first man cured of advanced prostate cancer. I know this man. He can do this. He's your best chance."

I remember every word, everything about that day so well. It was the beginning of our many trips to Johns Hopkins for endless trials. The hospital and the city became our second home. With each treatment, Charley gained some time. That was the plan. Gain time. Don't fall back. Keep going forward until the day something happens that places him into remission. And then keep going until the day something happens and he's cured.

His cancer metastasized. He was transferred from his urologist to an oncologist. When we met for the first time I asked, "Dr. Antonarakis. Did Dr. Rodriguez explain to you who this man is?"

He glanced at his chart.

"Doctor, this is my husband - the first man who will be cured of advanced prostate cancer."

Charley and I sit holding hands, talking all night in the hospital waiting room and in the early morning hours, he stands looking down at Dax, his grandson. I take a picture of them together for the first time.

Thanksgiving Day, November 24, 2011, His second grandson, Henry, is born and Charley is there. We have so much to be thankful for.

September 8, 2012, Hadley June, his precious granddaughter is born. This is the little girl he'll be taking to Disney on Ice dressed up like a princess.

Charley has been in the latest study for two months. His PSA had gone to 0.1.

His PSA has remained under 0.1. We are sitting in front of a computer screen and his oncologist is pointing to where the tumors have disappeared from his ribs. The bone is regenerating.

The latest trial is ending. Over four years in remission. Where would we go from here?

Dr. Antonarakis looks at Charley. "Well, maybe we should think out of the box and test your wife's theory? Maybe we should consider taking you off all medications to see if you are, in fact, cured?"

Charley and I had been discussing this possibility during the past year, knowing the study would be ending and we needed to be prepared to move to the next phase in this twelve-year journey.

We again sit with Dr. Antonarakis discussing our options. "It's time to test your wife's theory," he says. The decision is made. No more trials. No more treatments. No more flights to Baltimore every twenty-eight days. Charley's PSA will be monitored and we'll keep in contact with the doctor. If anything changes, he'll be placed back on the Xtandi.

We wake up the next morning realizing, for the first time in twelve years, our lives will not revolve around trips to Maryland. Charley will not be keeping his cancer journal each night. No more appointments, no more shots, no more scans, no more medications.

We celebrate our anniversary. It's a bright, sunny day, perfect for a whale watch and then dinner with friends. We toast to our marriage, to good friends, to our life together. I take his hand. "... to have and to hold, from this day forward...."