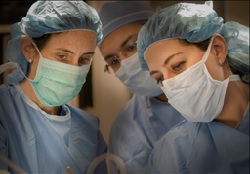 March 8 is International Women's Day. Our CareBlog celebrates with a heartwarming piece by Courtenay Moore, MD of the Cleveland Clinic

I get asked at least once a week "Why did a young woman like you go into urology? All you do is take care of old men." My typical reply is "Yes I take care of men but lots of women, young and old, are plagued with urologic issues."

During her multiple hospitalizations and outpatient chemotherapy sessions I met many women plagued by complications resulting from their gynecologic cancers including radiation cystitis, incontinence and genitourinary fistulas. It was during that year that I realized just how underserved women were in medicine especially in one field in particular- urology.

While urologic cancers primarily affect men, 30-50% of all women are affected by female pelvic floor disorders. Certain populations, like diabetic females are at an increased risk, with diabetic women 50 to 200% more likely to develop incontinence than non-diabetic women. While these disorders are not life threatening they can severely affect a woman's quality of life.

Studies have shown patients with incontinence are at increased risk for depression, social isolation, sexual dysfunction, hip fractures and nursing home admissions. I promised myself that I would promote women's urologic care so that women like my grandmother would have urologic treatment options and hope.

In July 2004, I began a female pelvic reconstructive surgery fellowship at the Cleveland Clinic. Given the paucity of data and research on pelvic floor disorders at the time I applied for a Urology Care Foundation grant to study the basic mechanisms related to the disorders of the female pelvic floor.

It is well know that both diabetes and vaginal deliveries are important risk factors for urinary incontinence. However no study had investigated the joint mechanistic effects of birth trauma and diabetes on the female lower urinary tract as an explanation for the higher prevalence of urinary incontinence among women with diabetes compared to non-diabetic women.

I would never have been involved in any of these projects if I had not been given the initial opportunity by the Urology Care Foundation. For which I am forever grateful. Ultimately my goal is to improve urologic care for women not only by treating pelvic floor disorders but ultimately by preventing them. And I think my grandmother would be proud.

Courtenay Moore, MD is a urologist with the Cleveland Clinic in Cleveland, Ohio. She is a past Urology Care Foundation Research Scholar.