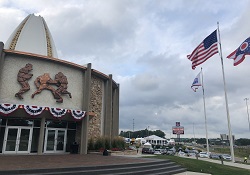 This year marks the ten year anniversary of the Urology Care Foundation's Know Your Stats About Prostate Cancer ® campaign. To honor the occasion, the Know Your Stats team led by spokesperson and prostate cancer survivor Mike Haynes visited the Hall of Fame to raise awareness.

During the much anticipated Enshrinement Week, National Football League (NFL) fans from around the globe came to Canton, Ohio (home of the Pro Football Hall of Fame) to welcome the new class of Hall of Famers.
Aside from the fact that Mike was enshrined as part of the class of 1997, Canton and the Hall of Fame holds a very special place in his heart.

It was ten years ago, nearly to the day, that the Know Your Stats campaign was born. In 2008, Mike was caught off guard when he learned there was an issue with his prostate health after a screening held at the Hall of Fame.

Mike began working with the Urology Care Foundation and the NFL on the campaign shortly after that screening in Canton. It was there that Mike had what he'd later call the "most powerful moment of his life." As spokesperson for Know Your Stats, he educates men and their families about their prostate cancer risks and the importance of talking with their doctor about prostate health.

The campaign is led by some of our favorite heroes of football. As part of the tenth anniversary of Know Your Stats, Mike will be sharing with NFL fans, his story of how prostate cancer caught him "off guard" ten years ago.

Mike's story gives hope to those newly diagnosed, or in treatment, and also reminds families to talk about their family health history. "I am one of nearly 3 million prostate cancer survivors in the United States," said Haynes. "If caught early, prostate cancer is one of the most treatable forms of cancer. By sharing my story, I can educate more men on knowing their risk for prostate cancer and make a difference in their lives."

Today, Mike and the campaign continue to encourage all men and their loved ones to visit KnowYourStats.org for information about prostate cancer.