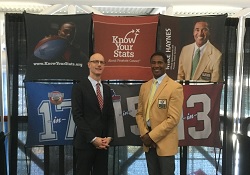 The Know Your Stats about Prostate Cancer team visited Super Bowl LI in Houston to raise prostate cancer awareness with fans around the world. Spokesman Mike Haynes and Dr. Edward Schaeffer met with media outlets covering the big game to spread facts on this disease.

Mike is a member of the Pro Football Hall of Fame and has been called the greatest cornerback to ever play the game. He is also a prostate cancer survivor after he was diagnosed with the disease in 2008.

Dr. Schaeffer is a top prostate cancer expert and chair of Northwestern University's Department of Urology. The Urology Care Foundation and National Football League (NFL) started the Know Your Stats® campaign in 2007 as a way to educate people about this disease. Prostate cancer affects 1 in 7 men.

Mike and Dr. Schaeffer teamed up as a rallying force to connect, educate and inspire men to know their risk and talk to their doctor about whether prostate cancer testing is right for them.

"Before I was diagnosed with prostate cancer, I had no idea I was at risk for this deadly disease," Mike said. "Now, as a cancer survivor, I feel the need to educate others about prostate cancer-- the more people who know my story, as well as their risk for prostate cancer, the more we raise awareness and save men's lives."

Dr. Schaeffer is no stranger to the media. In 2016, he met with the Howard Stern Show and movie star Ben Stiller. In the nationally aired interview, Stiller shared his prostate cancer journey and Dr. Schaeffer took questions on prostate health.

Stern is often called "The King of All Media" with his SiriusXM satellite radio platform reaching the 30-million subscriber milestone last year. Dr. Schaeffer and Ben reached a large audience with that show, and he found raising awareness over the airwaves to be rewarding.

At Super Bowl LI, Dr. Schaeffer once again reached a large audience as Mike and him spread the word about knowing your risk for prostate cancer. To learn more about prostate cancer, and to get free resources on prostate health, visit KnowYourStats.org.