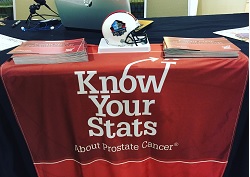 Prostate cancer survivor and Know Your Stats spokesman, Mike Haynes, traveled back to the site of his 1997 Hall of Fame induction to share his prostate cancer journey with fans, friends and National Football League (NFL) alumni.

Mike is widely known as being one of the greatest defensive backs in NFL history. As a Pro Football Hall of Famer, Mike Haynes has a special connection with Canton, Ohio (home of the Hall of Fame) that does not involve football. In 2008, Mike was caught off-guard when he learned there was an issue with his prostate health after a screening held at the Pro Football Hall of Fame in Canton.

After talking with his primary care doctor, Mike had a biopsy that showed he had prostate cancer. Following a successful treatment, he has been cancer-free ever since.

Starting in 2009, Mike has worked with the Urology Care Foundation and the NFL on the Know Your Stats about Prostate Cancer® campaign. As spokesperson for this national awareness campaign, he educates men and their families about knowing their prostate cancer risks and the importance of talking with their doctor about their prostate health.

"You don't want to find out you or someone you love has prostate cancer the way I found out," Mike said. "Don't sit on the sidelines. Early detection is key. Know your risk and talk to your doctor about whether prostate cancer testing is right for you."

Mike visits Canton every August to spread education on the disease. The audience in Canton is very large at this time of year. National and local media, NFL Players, fans and their families flock there for the Hall of Fame's annual enshrinement ceremony and preseason game.