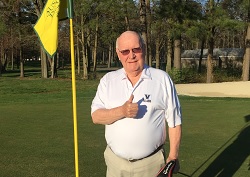 May is Bladder Cancer Awareness Month

"I'll be right back, fellas," Joe Conaway, 79, says as he tosses his driver into his golf bag and casually walks off the fifth hole at the golf club in Delaware where he has lived for most of his life.

The rest of his foursome waits patiently as they politely turn their backs away from the tree-lined ridge where Joe is emptying his urostomy bag. "Dumping", as he refers to it, allows him to golf for a few more hours without fear of an overflow.

Joe is happy to be back playing his weekly round of golf again. A year ago, he wasn't sure if that would be possible. He was diagnosed with Stage 3 bladder cancer which had already spread into the nearby muscles.

"I'll never forget it. My wife, Joann, and I were at my granddaughter's house watching my Alma Mater, Villanova University, play in the Elite Eight basketball game against Kansas. I went to the bathroom and A LOT of blood came out. It was scary. I knew this was something serious," Joe recalls.

He continued to have regular check-ups but nothing striking occurred again until March 2016 at his granddaughter's home. Quickly, Joe returned to his local urologist who performed a cystoscopy exam to see the inside of the bladder. Joe and Joann received the diagnosis together: cancer.

The local urologist suggested waiting a few weeks before any treatment. He felt that he wanted things to "settle down a bit," and Joe is not the type of person who can do that easily. Being in local politics for over 40 years, he's had to push to get things done; waiting was never an option for success. He used this same attitude when it came to his bladder cancer.

Within two weeks, he had an appointment with Dr. Trinity J. Bivalacqua at Johns Hopkins Hospital. He performed the same cystoscopic exam on Joe, and he had the same diagnosis of Stage 3 bladder cancer. However, Dr. Bivalacqua also said these words to Joe: I am 95% sure I can cure you. "I liked the doctor right away," Joe chuckles at the thought of him.

Dr. Bivalacqua reviewed what he felt would be the best treatment option for Joe which was removing his bladder and his prostate in order to get ahead of the cancer. He explained that by doing this, the cancer would be eliminated and could not spread. In addition, Joe agreed to have Dr. Bivalacqua remove some of his lymph nodes for a research study.

On June 24, 2016, Joe, Joann and two of their four children traveled to Baltimore for the surgery. Joe recalls, "I don't remember much of that day other than the fact that this nurse was kneeling on my gurney and tugging at my wedding band as I was being wheeled into the operating room." He says that although he was concerned about the surgery, he was even more anxious about that gold ring that he hadn't taken off in 56 years of marriage.

"They were going to have to cut it off in the O/R if we couldn't get it off beforehand. God bless that nurse... she was determined not to let that happen. With one last pull, she got it off and held it up like a trophy!" The surgery lasted about 7 hours and then Joe was in the hospital for another five days.

They returned to Hopkins to follow up with Dr. Bivalacqua. Joe and his family were thrilled to hear the doctor say he was 100% cured. There was no spread of the cancer, and he didn't need chemotherapy or radiation. Joe says he was a little taken-aback about this news. Although grateful, he was also humbled.

"You have to understand, I am a rough and tough guy," he explains.

In fact, he remembers that when he last spoke to one of his associates Delaware Senator Tom Carper, Carper told him, "You're too tough and mean to succumb to cancer."

Joe says that the people that he fought against in politics were also the very same people that prayed for him and were there for him through his cancer journey.

"I was like, ‘why aren't you praying AGAINST me?'" he questioned. When he received the good news from Dr. Bivalacqua, he realized that his life had just taken another turn. Good things have come out of a bad situation.

Joe sites his new-found humility and humbleness among the most moving aspects of his recovery. "I don't go after people who have a different opinion than mine anymore. I listen. I think, ‘They are entitled to their opinion, and maybe they could even be right,'" he says meekly.

In addition, Joe says that he has a new sense of thanks about his life that he really didn't have before his diagnosis. "I've known many people who have lost their lives to cancer. They're gone but I'm here. I am very grateful for that," he proclaims.

Perhaps the most tactical part of Joe's recovery has been his desire to now help other people with bladder cancer. He and Joann want to trademark the name "The Brotherhood of the Bag"- a lighthearted reference to those men who now have to depend on urostomy bags after bladder removal.

"I try to keep things light and have a sense of humor about my new lifestyle," he says.

He wants to share as much information with other patients as he can, even the embarrassing stuff. "I want others to know that it's okay to ‘fight the bag' like I do," he explains. "It's good to talk about things, share ideas of what works for you and what doesn't. From this, you find your own way."

Joe says he wants to change the way people talk and feel about the side effects of bladder and prostate surgery. He doesn't want people to be embarrassed or feel shameful about incontinence or erectile dysfunction after surgery. He says being open about his disease and having a sense of humor works best for him and those around him

Joe has developed coping mechanisms for himself that he would like to share with others, such as:

He wants to share with others how he's learned to conceal his bag, the tools he has tried to help with that, and some good educational resources. Joe says he is one of the lucky ones who had a supportive wife and family and a legion of friends and associates that helped him.

He now wants to pass that help onto others. "Attitude is everything. You can't let this thing beat you. You just can't," he says.

Joe strolls back from the edge of the fifth green, jumps into the golf cart with his buddy and points ahead. "Let's go!" he yells.

He's ready for the next golf hole and the next part of his life.

Read our Bladder Cancer article for more information on this disease. Joe Conaway can be reached at jconaway@hotmail.com.